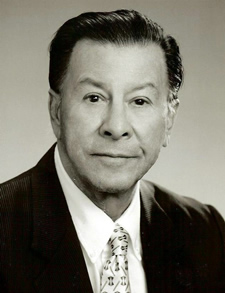 Respectfully known as the “Godfather of the Latino Movement”, Dr. Mario G. Obledo served as a dedicated leader in Civil Rights affairs for more than fifty years. Dr. Obledo applied science, law, business, and public service to advance the broad cause of civil rights and humanitarian causes that concerned Hispanics in our Nation. His accomplishments were recognized in 1998 when he received the Presidential Medal of Freedom Award, the highest award bestowed to a civilian, from then President William J. Clinton. Dr. Obledo’s leadership is recognized throughout the world. As co-founder of MALDEF (Mexican American Legal Defense and Educational Fund), and the Hispanic National Bar Association, Dr. Obledo was responsible in grounding national attention and strength to these organizations. He also held local, district, state and national offices with the League of United Latin American Citizens (LULAC).

Dr. Obledo served on the board of the Martin Luther King, Jr., Federal Holiday commission, and several legal and pharmaceutical organizations, and once as member of the faculty of the Harvard School of Law. As California Secretary of Health and Welfare, Dr. Obledo was instrumental in bringing thousands of Hispanics into state government, declaring it, “my greatest accomplishment in life”. With quiet dignity and uncommon wisdom, Dr. Obledo opened the doors of employment, freedom, challenge, and opportunity to all Americans, and at each point, Dr. Obledo, assured us of a stronger and more perfect union.

As National President of LULAC, he extended the influence of the organization into the international arena. And as past Chairman of the National Rainbow Push Coalition, he sought to unify the various ethnic racial and religious groups into a progressive political force in order to change the character and condition of our Country.

Dr. Obledo was Co-Founder of the Southwest Voter Registration Project. In this role, Dr. Obledo educated people about the importance of expressing their opinions through voting, with the specific intent of raising awareness to improve our democratic state. Dr. Obledo is the recipient of the OHTLI award, the highest award bestowed by Mexico on a foreigner.

Dr. Obledo was founder and held the position of President of the National Coalition of Hispanic Organizations. Dr. Mario G. Obledo passed away on August 18, 2010 in Sacramento, California. His wife Keda Alcala-Obledo, continues his work as Executive Director for the Mario G. Obledo National Coalition of Hispanic Organizations. Keda Alcala-Obledo has a life history of engagement in humanitarian work, activism, and advocacy. From her earliest days until the present she has sought to meet the needs of disadvantaged persons both in Mexico and in the United States. Mrs. Obledo brings over 20 years of experience collaborating closely with Dr. Obledo continuously working, and sharing a leadership role, key for the accomplishment of projects and objectives. Her partnership with Dr. Obledo gave her a perfect understanding of his goals for our Hispanic community and our Country.

Please accept our gratitude for your contribution that enables us to continue our work.